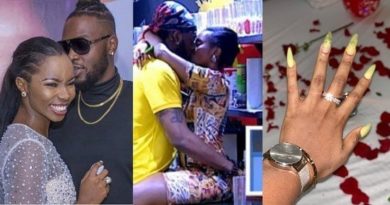 Teddy A and BamBam

2018 BBNaija housemates Teddy A and Bam Bam made headlines a few days ago after it was revealed that the couple are engaged.

Speaking on their engagement in an interview with PUNCH, Bam Bam affirmed that it is indeed real and advised that couples learn to be each other’s best friends so they can learn more about themselves, as well as know each other’s limits and boundaries.

ALSO READ: ‘An ex-boyfriend and a spiritual leader raped me’ – Bam Bam reveals

Bam Bam went on to gush about her man speaking on just how caring and mature he is, adding that, as celebrities, they have a handle on how to manage situations when it rises.

She also revealed that they both did not know the relationship would last as Teddy A had a serious girlfriend before meeting her but somehow found themselves drawn to each other.

She said they both knew this but kept on telling themselves it was for the game, but somehow they ended up with each other and are now engaged.

Please Share this on:
BBNaija 2020: Neo reveals his biggest fear outside lockdown house