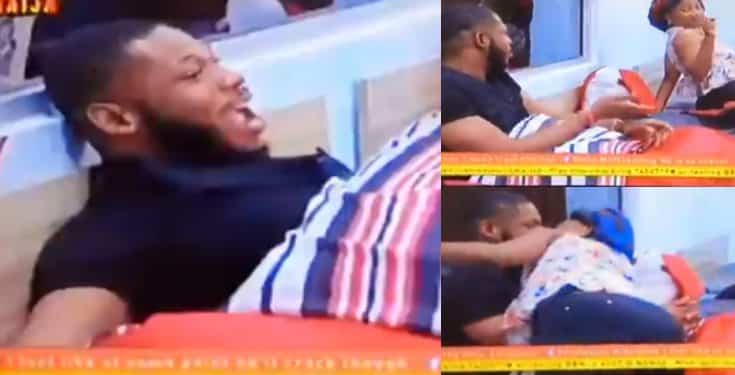 Frodd who seems to be so emotional, had earlier burst into tears after Esther turned down his offer to be in a relationship with him.

However, during Truth and Dare game in the house on Monday night, Frodd dared Esther to kiss him.

She did not hesitate as she planted a kiss on his lips, which caused an uproar in the house.

Also BBNaija fans have shared diverse reactions to their action.

@Tunde_ashekum “Frodd leave Esther matter I no this love thing can be painful but dnt be a sucker for love bro.Move on.”

@Pronce_Chris “She kissed him and gave him a lap dance when she had the option to drink. Esther likes Frodd, don’t get it twisted.”

@Chidera8481 “Like I swear what do Esther see in this Nelson guy, I prefer Esther be with Frodd.”

@Ojuelebgacardib “The most interesting thing this year is Frodd and Esther’s problematic relationship, Tacha’s dramatics, Mercy and Ike ghetto love. The rest are boring and should go home.”

@Kemsevo “Frodd really, you are obsessed and possessive.”