Big brother Naija housemate, Ike was spotted having a boner after seeing mercy. 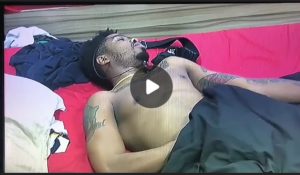 The 26-year-old reality star was however conscious of his environment as he did not go further in his actions.

He, however, went to mercy to get solace as he could not continue the action.

Recall Mercy and Ike are the second couples in the big brother’s house to have engaged in sexual activity after Gedoni and Khafi had incessant sexual marathon.