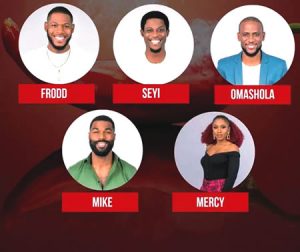 After three months, in which a total of 26 individuals have dwelled in the house, it was down to the top five housemates in Big Brother Naija from which the ultimate winner will emerge tonight.

This year’s edition has been all about Pepper Dem, and the last five standing – Seyi, Frodd, Mike, Mercy and Omashola – all had equal chances of finishing their once in a lifetime adventure by clinching the grand prize of N60m.

Now that Seyi and Omashola have been evicted, we would have our winner between Mercy, Frodd and Mike.