#BBNaija Day 33: Prince angry for not being pampered, the TGIF chil, Neo and Vee prank, and lots more…

Check out highlights from #BBNaija Day 33: Prince angry for not being pampered, the TGIF chil, Neo and Vee prank, and lots more… 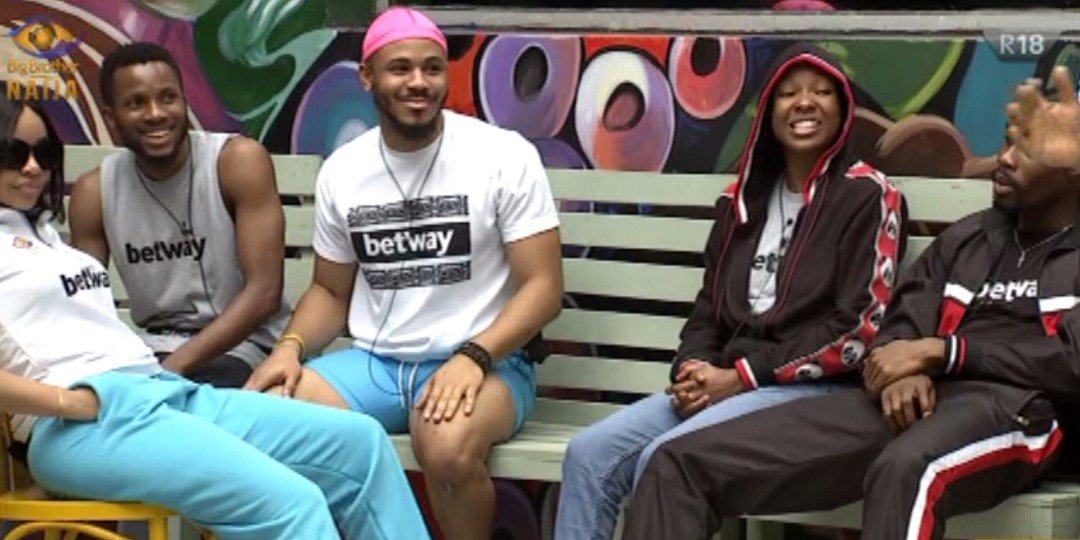 The Housemates huddled up in different groups as they waited for the Betway Trivia. From playing games to catching up, the Housemates explored the easy Friday afternoon.

Day 33: What would it cost you to leave?

Kiddwaya is on a mission to find out how much is enough money to make each Housemate hit the exit from Big Brother’s House. This time, he’s asking Tolanibaj and Laycon.

After completing their Wager Task, the Housemates went about their night with Neo and Vee up to silly pranks while Brighto and Wathoni have a little heart to heart.

With Eviction close, Ozo and Prince spend time while washing discussing past Live Eviction Shows and how they speculated the events in the House would be before they got in.

Day 33: A win and a counsel
After a win with her Team in the Betway Trivia, Vee proceeds to advise Laycon on the path he was treading in the BB Naija House.

Vee noticed Laycon was rekindling his relationship with Erica and she took it upon herself to advise him, but not before she joined her team for the Betway Nigeria Trivia.

It’s a win for Team White

The Housemates put on their game faces and their trivia hats as they battled against each other for this week’s Betway Nigeria Trivia. In the end, Team White won. As usual, they had to first separate themselves into two teams before playing. 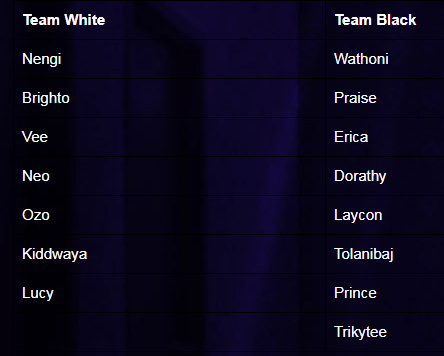 Trikytee had created the personae of the oracle that usually predicted the answer for whichever team he belonged to. The answer was usually arrived at after much deliberation. Last week, Ozo was the oracle in Trikytee’s team, but this time, Praise was the oracle in his new team (Team Black) but that wasn’t enough to secure a victory for them. After an intense clash, Team White edged their opponents with one point.

“It will end in tears,” Vee warned as she advised Laycon concerning what his rekindled friendship with Erica might cost him. She urged him to give himself space from Erica and focus on his ‘gangsta’ so as to avoid being distracted. Vee who is no stranger to the complicated relationship between Laycon and Erica deemed it fit to remind Laycon of the state he found himself in when he initially tried to break free. Vee was one of the few friends who helped him get over his sober phase and to keep him from slipping back into that hole, she insisted he stop whatever emotions were building up in him. “I don’t care if its infatuation or like, I need you to stop it,” she cautioned.

Neo believed no one had the right to tell Laycon what to do but he also warned him not to be wary of rekindling this close friendship with the hope of getting what he wants because if he doesn’t, he might end up in the state of despair he just came out from.

In spite of this cautionary warnings, Laycon is still his own man and the final decision on how he wants to pursue his relationship with Erica rests in his hands. Either way, he chooses, we will be here to see how it all turns out.

A mild argument took place between Prince and Lucy over his pampering demands resulting in him reiterating how Biggie had made it mandatory that he makes use of the privileges he rightfully deserves for winning the Arena Games.

Day 33: Worked up over pampering
Prince is upset that getting the pampering he deserves is becoming an issue in the BB Naija House and he gets into an argument over it.

The best part of winning the Arena Games is not just bragging rights, but also a week of pampering from the rest of the Housemates. It’s Prince’s turn to get his pampering but it is not going down well with everyone else. Biggie making it mandatory that he gets pampered makes it all the more complicated.

Explaining why you need to be pampered

A mild argument took place between Lucy and Prince as he explained why he was right to make requests of the other Housemates. “I don’t understand why everybody is having an issue with me telling them to do stuff for me,” he said complaining about the treatment being meted out to him. To make a case for his demands, he reiterated that Biggie made it mandatory that he made use of his privilege or face the consequence. Lucy grudge was that he seemed to be asking for too much as she sarcastically replied “flex your flex, it is your lucky tenure,” An upset Prince kept trying to explain that he wasn’t being extra with his demands and that he was just following instructions.

Wathoni might have found more than comfort in the arms of Brighto as their bond keeps getting stronger. Both Housemates spent the morning been a lot more playful than usual. “You know you want me in your space,” Wathoni said as she playfully pestered Brighto before they tossed and turned excitedly on the bed.

How much is enough money?

Kiddwaya is on a quest to find out if the Housemates would take the cash price of 25 million and a sponsorship deal to leave the House immediately. This time around, he asked Tolanibaj and Laycon. Tolanibaj refused to accept the deal and insisted she would stay in the House. Weighing her pros and cons, she seemed quite certain that one could bag more endorsement deals by staying in the House. She admitted that this notion was hinged on probability, but she didn’t mind taking that chance. Laycon didn’t even think it was a feasible deal so there was no point.

The uncertainty of the result of the Wager Task aside, the Housemates are in a fine mood and nothing can rain on their parade just yet.

Biggie took a vacation to relasss and be taken kiaroff leaving the Housemates with minimal supervision and giving #BBNaija fans the opportunity to decide what happens in the House and to the Housemates.

Day 33: Becoming Biggie
We asked BBNaija fans what they would do in the House and to the Housemates if they were Biggie and the replies were interesting.

It’s no longer news that the House is missing one key personality and that’s no one other than Big Brother himself. If you didn’t know Biggie has been away, well this is kind of awkward cause he’s been gone for quite a while and this can only mean, you haven’t been watching. Wow! Anyway, because we are nice, we will give you a recap. Biggie took a vacation from the House and the Housemates have been on their own with minimal supervision for almost a week now. It’s been long since we heard his warm and sometimes menacing voice boom through the House.

Biggie’s absence has left room for wild guesses as to his whereabouts. Let’s just say some of the guesses are the funniest we have ever heard. A few of the Housemates thought he was mad at them while the internet thought… you know what? Just read for yourself.

This one that biggie is going on holiday, abi biggie dey write waec??

To be honest, we’d love to tell you where Biggie went but we’d let him to that himself when he gets back.

Biggie’s vacation did come with some pros. Top on the list of the pros was the opportunity to take up Biggie’s power and suggest what happens in the BBNaija House. We asked that you send in your suggestions and you gave us quite a lot of responses with the #IfIWereBiggie hashtag.

After five Evictions, the Housemates are down to 15 and from your responses, 15 won’t do. You want more! You suggested that to spice things up a bit, there should be a few more Housemates added.

They didn’t have to be real Housemates; you guys would gladly accept fake Housemates too.

Since you were already suggesting the addition of fake Housemates, why not fake Evict a few (especially favs and romantic partners) just to set fire to the House.

#IfIWereBiggie I will take evict #Ozo to see nengi’s reaction 😩😩

It’s been smooth sailing for ships in the House in recent times with no particular threat and most of you want to switch things up. You just can’t believe these Housemates in relationships genuinely like/love each other and you want to see what would happen in the face of an irresistible threat. Once again, you are asking for more Housemates, but for a different purpose this time.

You even suggested pairing them with other Housemates just to upset the ships.

#IfIWereBiggie I would pair them up with different housemates for a week other than their ship partners like you did in double wahala. https://t.co/UZ6iMI8nA1

Not only do you want to storm ships and have a certain Housemate punished, but you also want the cliques dissolved.

#IfIWereBiggie Neo has used his BBNaira to buy flowers without consulting the house, that needs to be highlighted, break up the little cliques by forcing the “unlikelies” to work together, bring back veto power! https://t.co/iRFXXjIjZY

Oh well, you are Biggie now. You get to tell us how you want it done.

A few of you weren’t impressed with the Housemates Wager performance and for that, they deserved to be punished.

Firstly, biggie needs to drag them for their failure to comprehend this week’s wager task. They disgraced Nigeria, honestly. Then, BBNairas have to be more consequential! You also need to make them uncomfortable! They’re so chilled 🤦🏾‍♂️ https://t.co/iRFXXjIjZY

Talk to a counsellor

Fun and games aside, you do think the Housemates need to talk to a professional psychologist and you know what, that’s actually a great idea.

#ifiwerebigbrother I would bring in a psychologist and have the housemates have group and individual sessions. I would also pair people that have issues, parent a plant for a week. Would cancel one of the Saturday parties, will ask them to tell the pubkic why they should stay.

Let’s play pranks on them!

You came up with quite interesting pranks and we are quite sure you had devilish grins on your faces when you typed a couple.

I’ll make a certain housemate hide any housemates clothes/possessions/ anything of sentimental value without being noticed and if they succeed the person will get prize money. #IfIWereBiggie

Some of you went just a little bit too far though and it’s not that we don’t see how feasible the idea is, but are you sure? We need you to be sure cause there’s no turning back when we get the wheels in motion. Take these for example.

Watch some of your suggestions here

The responses keep pouring in and you all have amazing ideas of thing you’d do if you are Biggie. Be on the lookout, your suggestion might be the one that makes its way into the House.