BBNaija: Finally, Tacha Tells Her Fans Whom They Should Vote 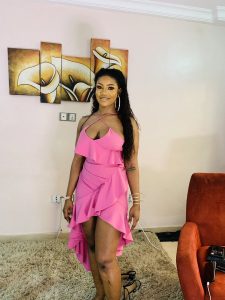 Following several pestering from Tacha fans as regards who should be voted since her disqualification, the controversial former housemate has finally given a lead.

Recall that Tacha had difficulties getting along with other housemates during her stay in the house with her only confidant being Khafi who has also been evicted.

Speaking via her Instagram live, the reality TV star said her ‘yellow chair’ should be voted.

Read Also: Is Time For A Lady To Win BBNaija; Rita Dominic Drums Support For Mercy

With five only housemates remaining in the running, a winner is expected to emerge on Sunday.

Tacha tells her fans, Titans to vote for her favourite yellow chair in the #BBNaija finals pic.twitter.com/FSM5k2MaUi