BBNaija Five Man Standing: Who Do You Think Would Win??? (PREDICT) 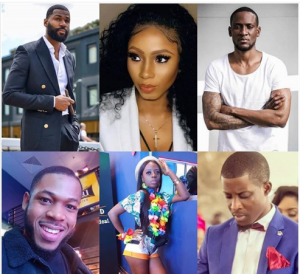 The 2019 edition of the Big Brother Nigeria reality TV show has finally entered its last week with just 6 contenders remaining.

The show started with 20 contenders before they were gradually evicted with Tacha being the only housemate to be disqualified from the show.

Many had rooted and hoped that the controversial housemate, Tacha, emerges victorious because of her huge fan base before she was evicted.

Read Also: BBNaija: I Have Handed Tacha To Her People: Ebuka(VIDEO)

As of Monday, 30th September, these are the remaining housemates going into the final week of the show:
B. Mercy
C. Omashola
D. Frodd
E. Seyi
Who do you think would emerge victoriously???