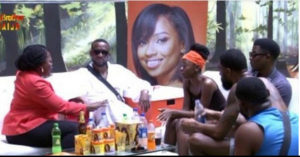 Nollywood actress and movie producer, Funke Akindele, paid a surprise visit to the Big Brother Nigeria show on Sunday, September 22nd, where she was received with joy and happiness by the housemates.

During her short visit to the house, she advised the housemates on various passions and vocations. Diane, one of the housemates, then used the opportunity to tell the screen diva about her passion for the big screen and she gave her an invitation to feature on the comedy series ”Jenifa’s diary.”

Watch the video of her visit below:

She admonishes the housemates and tells Diane she will feature in Jenifa’s Dairy 👏🏾👏🏾#BBNaija #FunkeAkindele #Diane #Mercy pic.twitter.com/B5qOc7GEBF