BBNaija: Ike Opens Up On Sex With Mercy [VIDEO]

Big Brother Naija housemate and number one gangsta, Ike Onyema has cleared the air on having sex with Mercy Eke on Saturday. 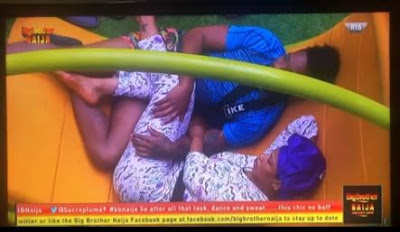 A viral video had emerged on Sunday morning showing both housemates in a compromising position.

Mercy was seen riding him under the duvet after he had initially sucked her boobs.

While some BBNaija fans suggested they had sex, others rebuffed it as they described it as just mere romance .

The romantic couple came out to speak on the issue on Sunday while they were laying down in the garden.

Ike revealed he almost had sex with Mercy but her pajamas and facial expression stopped him from doing so.

“I would have had sex if it was someone else, you were the one calming me down and I didn’t want to pressurize you.

“I told them this morning we were just playing under the duvet that nothing happened, if it was someone else something would have happened but this your pajamas saved you.

“I did not want to pressurize you, in case you would give in and later regret. I just saw your facial expression and stopped.”

Mercy on the other end responded saying,

“When I was coming here I made sure I packed this kind of pyjamas that you would have to open from up to down before you can do anything.

Thank God I brought them and that’s what I’ll be wearing. You cannot put a hole in it.”