BBNaija Star, Liquorose Storms Out Of Show Over Insensitive Joke 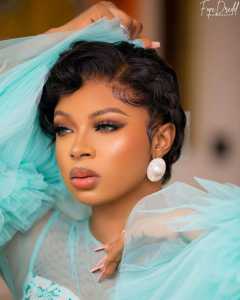 Liquorose Afije, a popular BBNaija star, stormed out of a talent show angry over an offensive joke made about her failed relationship.

Recall, that the former BBNaija housemate had a messy breakup with Emmanuel Umoh after their relationship ended on the show.

READ ALSO: BBNaija Reunion: ‘I Never Asked Liquorose Out And We Never Agreed We Were Dating’ – Emmanuel

Two comedians, clad in white attires, playfully told Liquorose that God gave her a man but she let him go.

The joke also got several members of the audience laughing. Seemingly angered, Liquorose stood up and left the session.

The reality star, did not wait for even a moment to endure the humiliation. She left while the performance was still going on.

Moment #BBNajia former housemate #Liquorose walked out on comedians after they tried to tell a joke about her ex bf Emmanuel#BigBrotherNaijaS7 #BBNaijaSeason7 #UkraineWar #SHUTDOWN pic.twitter.com/R16r6flMKe