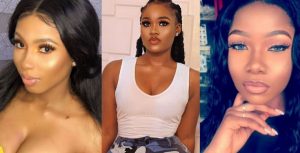 Recall that Cee-C, a former housemate in the previous edition of the reality TV show, became controversial and engaged in feuds with fellow housemates as the show approached its tail end.

Mercy thinks Tacha is also trying to employ the same tactics so as to become fans favorite.

“She can’t be CeeC; she no even hard. She’s forming to be hard, but that is how CeeC is. This one [Tacha] is a wannabe, low-budget CeeC.”