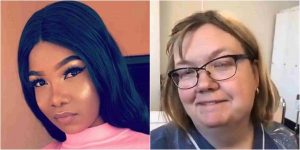 2019 Big Brother Nigeria housemate, Tacha, has definitely gone International as a video of a white woman campaigning and soliciting votes for her has surfaced on the internet.

In the video, the unidentified white woman was heard shouting vote, Tacha. The controversial housemate is currently facing eviction after Frodd, a fellow housemate, nominated her.

Voting is expected to end on Thursday with the announcement on who would be evicted made on Sunday.

Celebrities like Peter Okoye, Bobrisky and the likes have also identified with the controversial housemate.