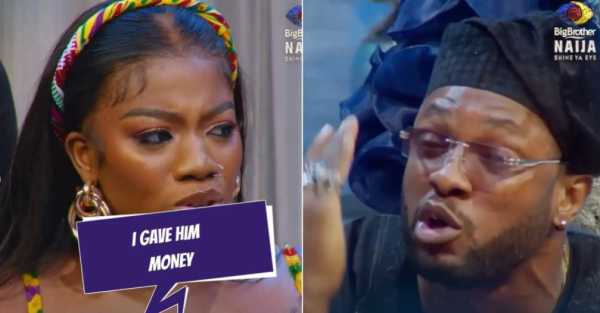 Former Big Brother Naija ‘Shine Ya Eye’ Housemate Angel Smith has come under heavy criticism after spilling details of how she has helped her colleague, Cross since the reality show ended.

During the 9th episode of the reunion last night, Angel expressed that Cross has never for once reciprocated the same energy she gives in their friendship.

According to Angel, she helps Cross whenever he needs money, had booked a Spa for him, cooked for him and even drove to the mainland to see him.

In her words: “I know what I have done for Cross. When he has needs for money and comes to me, I never hesitate to give him. He has never spent on me. 3 times he was sick, I cooked for him. I don’t drive to mainland for whatever reason but cos of Cross I have. I booked a Spa fro him but he wasn’t reciprocating the same energy.”

The statement generated reactions online as netizens slammed Angel for spiling such details on Live TV.

Do2dtun wrote: “If you would come on live tv to tell the word what you have done for me then it was never from a genuine place. You either did it for a stake to you did it cos you need to hold it against me.”

_aniscooser wrote: “Angel is the type of lady that will throw in your face all that she has done for you but devalue everything that you done for them! That’s bad”

ceemplybecca wrote: “The money part waz totally unnecessary! May we not ask parrots for help”

veevogee wrote: “Angel you shut up. I was embarrassed on behalf of Cross last night. How can you help someone and broadcast it to the world Na wa o…..Las Las Vain is the help of a man”

its.mryum wrote: “The money part was so unnecessary just wanted to ridicule cross”

itznicole______ wrote: “I love Angel, but what was all that about abeg!? She victimizes herself a lot and it’s unnecessary, sometimes toxic. I sha know she must have really liked cross”

The post BBNaija’s Angel Comes Under Attack For Spilling How She Helped Cross On TV appeared first on Information Nigeria.