Nigerian crossdresser, Bobrisky, has taken to Instagram to reveal the reasons why he loves self-acclaimed Port-Harcourt first daughter, Tacha.

According to Bobrisky, he stated that there were two major reasons he liked the “Pepper Dem” contestant of the ongoing BBNaija.

According to the crossdresser, he likes her because she accepts nonsense and her energy towards the people that want her out of the show is superb.

He wrote, “We are saving money for you till day 99 as our winner. Anybody that wants hate should better continue. Two reasons I love Tacha
1) she takes nonsense
2) her energy toward people who want her out is superb. Give them baby we are solid behind u.” 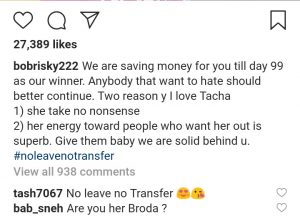 Prior to this time, Bobrisky who was in the news after the described the incumbent president of Nigeria, Muhammadu Buhari, as his only problem.

Tonto had shared a photo of the president which she captioned “My baby… Baby Bubu, #haters will say it’s a lie..”

Reacting, Bobrisky wrote “the only problem I have in my life.”

Meanwhile, the Lagos State Police Command arrested Bobrisky and sealed the venue he planned to hold his 28th birthday party on August 31.

His arrest came after he slammed the Director-General of National Council for Arts and Culture (NCAC), Olusegun Runsewe who had described him as ‘a national disgrace’, saying the male barbie must be condemned to go back to how he was initially created.