Diane Can Not Talk To Me Outside BBNaija Show: Tacha (VIDEO) 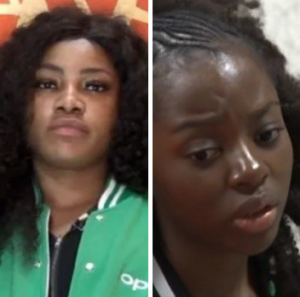 Big Brother Nigeria show was thrown into rancour on Thursday after a fight broke out between the duo os Diane and controversial housemate, Tacha.

Trouble started after Tacha yelled at Diane for leaving the red box behind while partying with legendary singer, Tuface Idibia, who paid the house a visit.

Ebuka, the show host had earlier issued a strong warning that the housemates would be punished if the red box gets missing.

Read Also: Hope No One Would Get Pregnant Soon;- Bisi Alimi Throws Jab At Tuface After Visit To BBNaija House

Diane, while trying to talk back was shrugged off by Tacha who went on to lambasted her and added that she can not even talk to her outside the show.