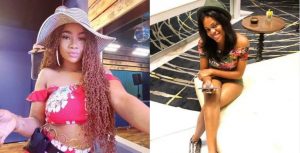 Former Big Brother Nigeria Housemate, Jackye, has recounted telling viewers that recently evicted housemate, Tacha, is a time bomb that would soon explode. She added that she was trolled after making the comment.

Her reaction comes after the controversial housemate was disqualified from the reality TV show as a result of violent conduct on Friday.

The duo of Jackye and Tacha never got along in the house with the latter professing that the former is fetish.

‘when I said she’s a walking time bomb you all trolled me. Now, she didn’t see the 99th day she always wanted. Anyways I wish her all the best and I hope she becomes a better person’.

What she posted below: 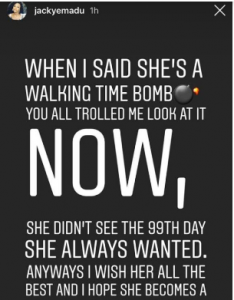