Lagos on lock down as 12,000 youths besiege BBNaija audition centre 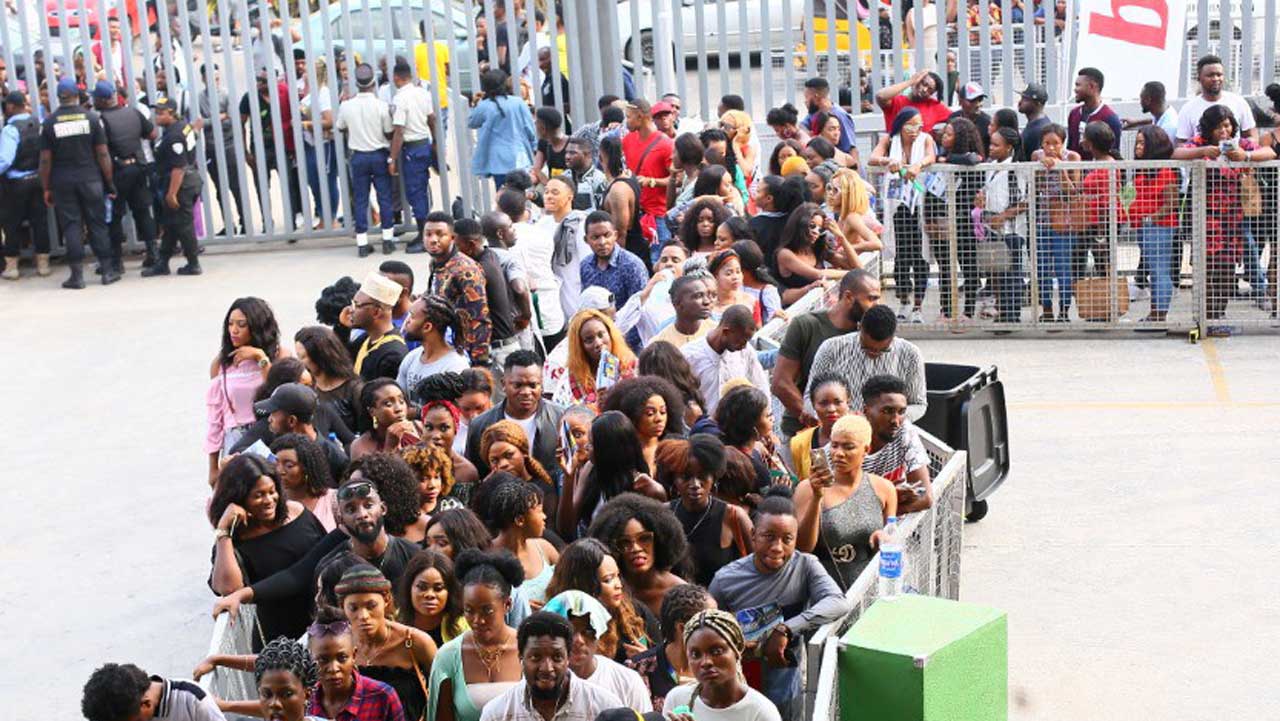 The youths in the numbers were seen shuffling and pushing one another to have their way into the audition room to be selected for the reality show that promises a juicy win prize of 45 million naira for the winner in this year’s edition.

As early as 4am, most participants had arrived at the venue for the audition. The Guardian gathered that some of the wannbe ‘BBNaija alumnus’ slept at nearby facility to beat the rush. Traffic situation within Aromire Street, Adeniyi Jones, Oba Akran and environs was hectic, as participants in their large number cordoned off the roads.

In a video that went online, a lady was seen scaling the high iron fence that shield the premises from intruders in a bid to bypass the long queue to make her way into the venue.

Meanwhile reactions have trailed the massive turnout of youth for the auditions. A Twitter user, Tosin Olugbenga @tosinOlugbenga, gave a reason why he believes this year’s audition witnessed massive turnout.

“No jobs… ASUU is on strike… Guess what? #BBNaija #bbnaija2019 got this crowd at the audition as early as 4:45am. Apparently some people slept at the venue,” he tweeted.

Another Twitter user, @ilynem, wrote: “The crowd at the #BBnaija auditions is proof of our flawed value system and our failed government. I am not against anyone going to audition for it, but when this is what majority of our youth see as a way to escape poverty, then we have a serious problem.”

For Aderonke Obadimeji @runkykush, “What kind of a country is this? Imagine blocking the whole of Adeniyi Jones because of Big Brother. I shake my head for this nation.”

@sazzygel_CEO, wrote: “Honestly… they shouldn’t have done #BBNaija this year at all. Not during this political year. But I feel it’s a calculated attempt to distract the highest voting population, a.k.a. Naija youths! Same government that threatened to ban it, are now mute on the matter?”

Although Multichoice has disassociated itself from the rumor that it pre -select housemates before the audition, some Nigerians believe that joining in the huge crowd is a waste of time and energy.

A Nigerian who identify himself as Danny and with the handle @itz_dannie urged the youths want use the BBNaija platform to get fame and fortune to: “Please don’t waste your time going for BBNaija 2019 auditions in Lagos again cause they’ve sold the slots already… now they’ll just either waste your time or just have sex with you for nothing,” he noted.

Though majority of the aspiring housemates came to try their luck, some sieze the opportunity to steal peoples belonging as some participants lost their phones and international passports.

A Twitter user @el1shuaib noted that “Most of those guys that went for the #BBNajia audition at midnight are not there for the audition, they’re hustlers. Do you know how much they’ll sell their space in that queue?”

Some aspiring housemates, who spoke to The Guardian, said that their motive of going to Big Brother House is to achieve fame that the platform avails, the mouth-watering 45 million naira ($100,000) and other consolation prizes that include, an SUV, wardrobe allowance, and endorsement deals.