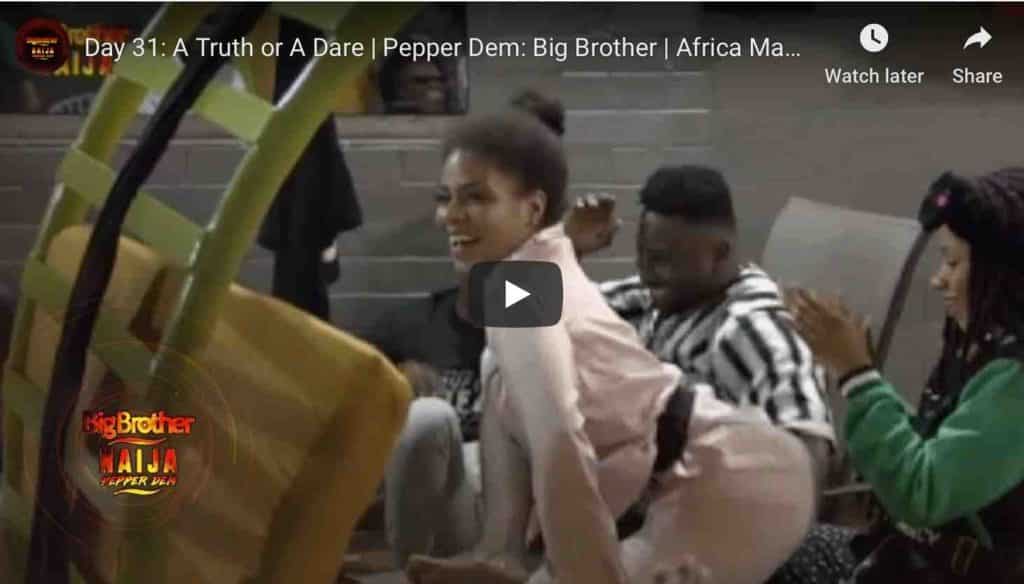 Big Brother added a new twist to this year’s BBNaija Pepper Dem show by bringing in two new housemates last night. The show’s organisers surprised viewers with the choices for the new housemates, seeing as they are both already sort of popular in the entertainment space.

Venita, a former video vixen and an active actor, and Elozonam, an actor were brought in as new housemates.

The new housemates quickly settled in, as they proceeded to fire up the house with wild dares.

It seems that their sole purpose for coming into the big brother house was to bring the hot spice that the housemates seemed to have forgotten. We dare say they succeeded because viewers got to see the wild side of some housemates.

Honestly though, the star of last night’s “Housemates gone wild show” was Diane (shocking, right?). Well, Diane was at the centre of all the wild dares, both on the giving and the receiving end. Who would have ever believed that Diane would be the one to dare Venita to give Frodd a hand job? She also asked Elozonam to finger Mercy only a few minutes after that. You guessed right, neither of those dares actually went down. However, she carried out her own dare when she was asked to suck Seyi’s ni**les; it was surprising though that Seyi actually allowed it.

The only other dares worth talking about is Omashola’s dare to kiss Venita for 5 seconds, which he jumped at. He could not hide his excitement as he took full advantage of his opportunity since he had been crushing on her. Jackye also surprised us when she was asked to take off Dianne’s panties and she was actually game. Dianne allowed Jackye to take off her pant and whirl it around.

Is it wise to say we can expect more spice in the house now? We really hope so! Anyway, tell us what you think about the wild night the housemates had in the comments.