[Video] BBNaija2019: Ike and Mercy All Loved Up

As housemates begin to settle with each other in the Big Brother Naija house, it seems romantic relationship is also developing amongst the housemates.

At the forefront of romantic relationship in the house is Gedoni and Khafi, who both became closer after surviving eviction that saw Avala and Isilomo depart the reality show. 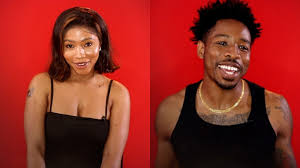 Another love story that seems to be developing pretty fast is that of Ike and Mercy. The duo has been seen with each other frequently than other housemates.

Mercy confessed that she slept like a baby last night and Ike flaunted his manliness at her, telling her she slept that way because a real mam held her.